"Starring in Fugard's dramatic masterpiece are Darryl Maximilian Robinson as Zachariah and Jonathan Pereira as Morris, who are two brothers living in Port Elizabeth, South Africa, victims of the Satanic, oppressive apartheid...Both actors provided for the audience a profound and compelling interpretation of "The Blood Knot" of two brothers white and black who were both confused and bewildered. From beginning to its conclusion, Robinson and Pereira were totally involved in the play...Having seen many productions of "Blood Knot" since it first premiered two decades ago, Excaliber Shakespeare Company's production is by far the best I have witnessed." -- Earl Calloway, The Chicago Defender, Feb. 10, 1999.

"Morris, the lighter younger brother, struggles to maintain his ground against his domineering working-class older and darker brother Zachariah. Actor-director Darryl Maximilian Robinson wears the laborer Zachariah's roughneck demeanor like a pair of well-worn work boots. Douglas Pelletier's portrayal of Morris is a perfect foil to Zachariah...Both actors bring their character's conflict to a boil in physical scenes that are as searing as the scenes of emotional sparring. This production of The Blood Knot shows the path to racial accommodation will not always be painless." -- Robert Schultz, The Chicago Outlines, Theatre, Feb. 17, 1999.

"There are times when material and individuals click, They mesh. They congeal. Such is the case with the works of Athol Fugard and the actor/director/producer Darryl Maximilian Robinson. As the founder of The Excaliber Shakespeare Company of Chicago, a multi-racial professional Chamber Theatre, he has performed such classics as Beckett, Shaw and Shakespeare with a historical perspective and a obvious love of the material. The production has been well staged. One reason is Robinson himself. His voice soars with appreciative emotion. His stage presence engulfs as it brings life to the character. His is a performance, very well executed. Crisply precise. But, when he performs in a Fugard play, something else happens. He no longer acts a role. He is the role." -- Al Boswell, A Point of View, The Gary Info, Feb. 4, 1999.

Two biological brothers, one white-skinned, one black-skinned, living under the boot of the racist policy of apartheid in Port Elizabeth, South Africa ( as well as living under the same pondokkie roof ), stand at the center of the powerful, emotionally-searing, humorous and touching dramatic masterpiece known as Athol Fugard's The Blood Knot.

Morris, the lighter brother, refuses to venture from the house. He does not wish to be identified or caught not fitting in.

Zachariah, the darker brother, must work to provide bread and means, but also must face the foul, unjust and oppressive practices the white authorities heap on him at any time for a moment's pleasure.

Fugard's tale of oppression, apartheid, and ultimately bonding brotherhood was his first truly acclaimed stage work. Due to the political climate at the time, the work initially received a premiere of one public performance only in 1961, with Athol Fugard appearing as Morris, and his gifted life-long friend and fellow actor Zakes Mokae as Zachariah in Johannesburg, South Africa. However, a highly-respected and noted American theatre producer, Lucille Lortel, opted to present the work Off-Broadway in New York in 1964, starring J. D. Cannon as Morris and James Earl Jones as Zachariah under the direction of John Berry. The piece ran at The Cricket Theatre for 239 performances, was the first South African play in New York to feature a multi-racial cast, received fine notices, and launched Athol Fugard's American career as a playwright!

It would be decades later, and only having staged multiple productions of Fugard's Master Harold And The Boys, that Excaliber Shakespeare Company of Chicago Founder and Joseph Jefferson Citation Award-winning Principal Actor Darryl Maximilian Robinson would feel drawn and compelled to direct and play Zachariah in Fugard's poignant, racially-charged tale of sibling rivalry. He mounted the ESC's 1999 revival of The Blood Knot at The Heartland Cafe Studio Theatre in the Rogers Park neighborhood of The Windy City.

And he was lucky and blessed to play Zachariah opposite two fine and talented actors alternating in the role of Morris: Douglas Pelletier and Jonathan Pereira. Most critics and audiences responded quite positively to Director Robinson's second staging of a Fugard work, and though it ultimately garnered no Chicago Jeff Citation Award nominations, The 1999 Excaliber Shakespeare Company of Chicago revival of The Blood Knot was Jeff Recommended.

And, at the end of the theatre season, for his staging of the play, Darryl Maximilian Robinson received a 1999 Chicago Black Theatre Alliance / Ira Aldridge Award Nomination for Best Direction Of An Ensemble. Mr. Robinson has always been and will be grateful to his "two stage brothers" from The Blood Knot for that.

Most recently, during an extended year-long visit to his original hometown of Chicago, Darryl Maximilian Robinson garnered attention for his well-received portrayal of the marvelous dual roles of Mr. William Cartwright, Your Chairman of The Music Hall Royale and The Mayor Thomas Sapsea of Cloisterham, England in skilled Director / Music Director Robert-Eric West's 2018 Saint Sebastian Players of Chicago Revival Production of Rupert Holmes' classic Tony Award-winning Best Musical Mystery Whodunit The Mystery of Edwin Drood presented at the lovely, more than a century old St. Bonaventure Church in the West Lakeview neighborhood of The Windy City. Mr. Robinson's performance was critically-praised, documented earlier this year by Wikipedia, and in November of 2019: The Year of Chicago Theatre, captured for him a 2019 Chicago BroadwayWorld.com Regional Theatre Award Nomination for Best Performer In A Musical or Revue ( Resident  Non-Equity ). The SSP Revival of  The Mystery of Edwin Drood received a grand total of Seven 2019 Chicago BroadwayWorld.com Regional Theatre Award Nominations including: Best Performer In A Musical or Revue ( Resident Non-Equity ) for Sarah Myers for her fine portrayal of Edwin Drood and Miss Alice Nutting; Best Direction of A Musical or Revue ( Resident Non-Equity ) for Robert-Eric West; Best Choreography ( Resident Non-Equity ) for Tamara Drew; Best Costume Design ( Resident Non-Equity ) for Sandra Leander; Best Set Design ( Resident Non-Equity ) for Emil Zbella; and Best Ensemble of A Musical ( Resident Non-Equity ) for THE ENTIRE CAST! Those who love musical theatre performance in The Windy City that would like to honor and support the work of Mr. Robinson and his fellow nominees of Rupert Holmes' brilliant but seldom performed stage classic with their votes for this critically-praised Non-Equity professional theatre production may do so by visiting: BroadwayWorld.com Chicago Regional Theatre Awards Voting!

Note: The muliracial, non-Equity professional chamber theatre, The Excaliber Shakespeare Company of Chicago is pleased, proud and honored to share and present this archival article in acknowledgement of 2019: The Year of Chicago Theatre! 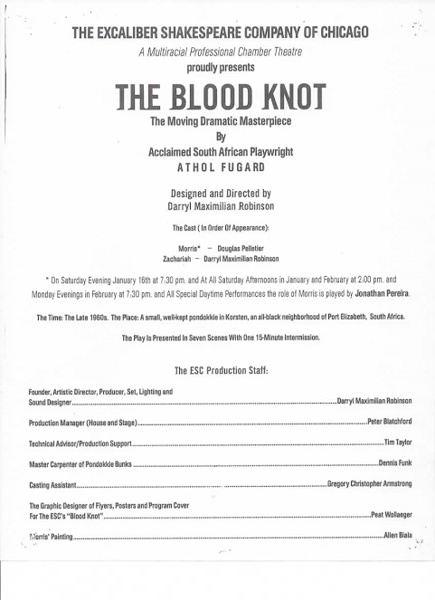 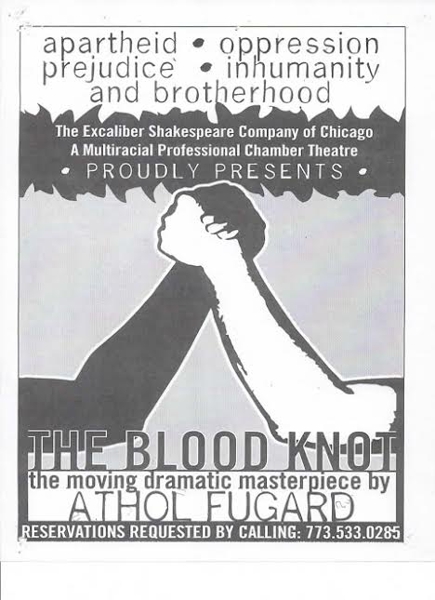 Retrieved from "https://theatre.fandom.com/wiki/Athol_Fugard%27s_The_Blood_Knot_(_1961_)?oldid=13259"
Community content is available under CC-BY-SA unless otherwise noted.