Charlie and the Chocolate Factory is a West End musical written by David Greig, with music and lyrics by Marc Shaiman and Scott Wittman. Based on the children's novel of the same name, written by Roald Dahl, the new musical is directed by Sam Mendes. It had its world premiere at the Theatre Royal, Drury Lane in London on 25 June 2013 with Douglas Hodge as Willy Wonka.

The musical is based on the 1964 children's novel, by Roald Dahl. A first reading of the first act from the show was carried out in New York in May 2010, with the intention of opening in London the following year.

Officially confirmed on 18 June 2012, producers announced that the show would play the Theatre Royal Drury Lane from May 2013,[1] with tickets going on sale in October 2012. The show is written by playwright David Greig and directed by Sam Mendes, with choreography by Peter Darling, orchestrations by Doug Besterman, set design by Mark Thompson and lighting design by Paul Pyant.[2] An original score has been penned by Marc Shaiman with lyrics by Scott Wittman and Marc Shaiman (Grammy® winners for Hairspray; Smash). The show presents a more contemporary version of the original story.

During previews many changes took place, with the main addition to the show being the addition of the Great Glass Elevator.

Revived by Murwillumbah Theatre Company in 2012

Charlie and the Chocolate Factory was expected to begin previews on 17 May 2013, at the Theatre Royal, Drury Lane, London, before holding its official opening gala night on 25 June 2013. The show was originally due to open at the London Palladium. Douglas Hodge was announced to be leading the production in the role of Willy Wonka, with further casting announced on 11 January 2013. Previews of the show were delayed by five days until 22 May, due to "unforeseen problems in the delivery of a piece of stage engineering by a contractor". Following opening night the booking period for the show was extended until 31 May 2014.

†Lyrics by Leslie Bricusse, Music by Anthony Newley for the 1971 film, Willy Wonka & the Chocolate Factory.

Template:Expand section The West End production of Charlie and the Chocolate Factory received mixed reviews from critics.[5] While the physical production and quality of the performances were generally praised, the score and storytelling received criticism. 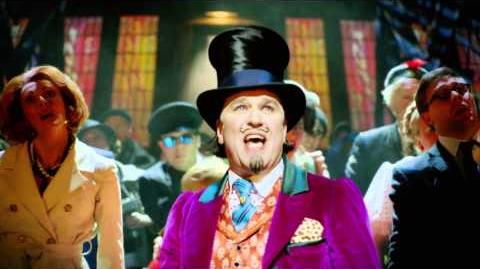 Retrieved from "https://theatre.fandom.com/wiki/Charlie_and_the_Chocolate_Factory?oldid=7548"
Community content is available under CC-BY-SA unless otherwise noted.